When a company has its IPO — or initial public offering — it’s the first time that ordinary investors have a chance to buy a tiny slice of the company. As I’ll cover below, investing in IPOs isn’t for everyone. Shares of newly IPO’d companies can often soar or sink to dizzying levels during their first few months on the market.

Take Beyond Meat, for example. The company — which offers plant-based meat alternatives that are becoming increasingly popular at fast-food chains — went public on May 2. Shares started trading at $25 apiece. Less than two months later, they were topping out at $200. That’s insane — a $15,000 investment was worth $120,000 in a matter of weeks. We’ll have to wait to see where the stock goes in the long term.

Of course, the early days aren’t always so rosy. Back when Facebook went public in 2012, shares lost more than 50% of their value in less than four months. That might’ve scared investors out of the stock, which would have been a huge mistake: Shares returned more than 1,000% in the ensuing six years…

As you can see, stocks can be volatile right after they first start trading publicly. That can make holding shares in a newly IPO’d stock trying on the nerves. In fact, we’ve talked extensively here at The Motley Fool about the perils of investing on the first actual day of trading: Things can get so volatile that it’s best to wait a few days or weeks to dive in.

And I’m not a huge fan of “big” buys on recently IPO’d stocks either. These are companies that have limited operating history. Most people are just starting to kick the tires. If you don’t have a solid thesis for investing in the stock, a set of metrics to test your thesis, and the conviction to hold regardless of what the stock is doing, it isn’t for you.

But that doesn’t mean you need to avoid recently IPO’d stocks altogether. This is where I can help out. Below, I’ll discuss five stocks that have had their IPO since Jan. 1, 2017. For each one, I’ll describe what the company does, why I believe in it, and how you can check to see if the company is delivering.

Just as important, I have my own skin in the game: I own shares of all five companies.

Okta: Managing identity in the cloud

The cloud, or the global network of servers connected to the Internet, stores more vital data than we could ever imagine. And the sheer volume of such critical data — including things like your Social Security number, test results from health screenings, and proprietary company information — is only going to increase. Secured access to that data is paramount, and that’s where Okta comes in.

This is a software-as-a-service (SaaS) company that helps companies manage which employees and customers have access to cloud-hosted data. As you can see below, the popularity of Okta’s offerings is not in question — especially among customers that are willing to shell out more than $100,000 per year. 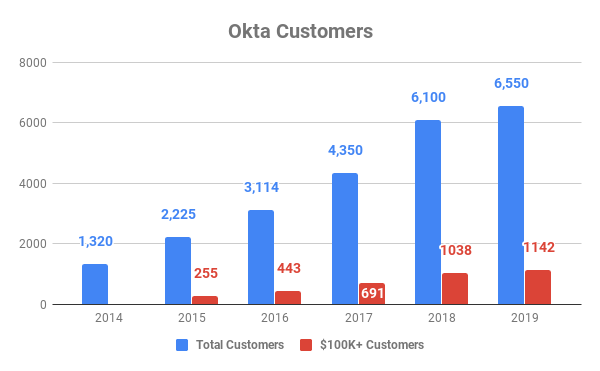 It’s worth noting that the 2019 figures in that chart only take into account the first three months of its fiscal year, which started on Feb. 1. Since 2015, the total number of customers has increased 39% per year. More importantly — and impressively — the number of annual contracts over $100,000 has jumped 59% per year.

Okta benefits from two widening moats that set it apart from competitors. The first comes from high “switching costs.” Once a company starts using a standard Okta tool, like single sign-on or multifactor authentication, it comes to rely on the service. Over time, customers start using more Okta tools to help keep their data secure and to give employees and customers access to data. In all, Okta has 12 different products — though this number is sure to grow.

As customers add more Okta services and use them more, it becomes onerous to switch to an Okta competitor. Doing so might not only be financially costly but would also require retraining employees and reentering data permissions across the board.

The best way to measure Okta’s success in becoming ever more deeply embedded in customers’ DNA is to monitor the company’s dollar-based retention rate (DBRR). This measures the total amount of revenue one cohort of customers spends from one year to the next. By filtering out the effect of new customers, we get an idea if customers are staying with Okta (DBRR near 100%) or even adding more services (DBRR above 100%).

Here are the results so far.

DATA SOURCE: SEC FILINGS. *DBRR FOR TRAILING 12 MONTHS AS OF END OF THE FIRST QUARTER OF FISCAL 2019.

As if that weren’t enough, Okta also benefits from “network effects”: Each additional new user makes the service stronger for existing users. That’s because the company uses “progressive” user profiling to make sure people on the Internet are who they say they are.

This type of profiling requires artificial intelligence and machine learning (AI/ML). Things like AI and ML become much more powerful — and accurate — when they have more data to learn from. Each additional customer adds to Okta’s superiority in progressive user profiling, a fancy way of saying that the way Okta identifies users is always changing as it gathers more data. This makes it much harder for the competition to ever catch up.

I believe there’s still lots of room to grow. The company is worth $15 billion to investors today, but thanks to the dual moats and huge tailwind of data migration to the cloud, I think we could look back in five years and consider today’s shares to be a steal.

Roku: More than you know

Roku might be the only company on this list that the majority of Americans are familiar with. The company sells a $30 USB plug-in that allows you to access all of your streaming options from one interface on your TV. If you have a Netflix account, use Amazon for video rentals or Prime streaming, like watching PBS with the kids, and hop on YouTube when you’re bored, you can do it all from Roku’s interface.

On the surface, this doesn’t seem like a very good money-making deal. But there’s lots happening behind the scenes. Outside of those USB sticks — or TVs that are sold with Roku’s platform automatically installed — the company has three other revenue streams:

The second item on that list is probably the least significant. The first item on the list might also seem weak, but we’re about to see how that may change. Roku should hit 30 million customers by late 2019, and Disney is set to come out with its own streaming service later this year — available on Roku. If any of those 30 million sign up for the Disney+ service, it will show up on Roku’s income statement, though details aren’t clear on how big that cut will be.

But by far the most important contributor is the ad-supported revenue. If you watch YouTube or any other such service on Roku, each additional hour spent viewing means cash for Roku.

There’s no way to know how many of those billions of streaming hours were spent on ad-supported channels. But even if they weren’t, Roku is collecting data on viewing habits that it can then use to offer up more specifically targeted ads. That data is pure gold. Even if data is collected on users who don’t watch ad-supported programs, it can be cross-referenced with those who share similar viewing habits and do watch ad-supported programs — making the targeting more robust.

It might seem like Roku is in a precarious place in the value chain: It has relatively little content to speak of and simply serves as a place to access all of your content. But it is a powerful aggregator of viewers. Streaming services know that by putting their services on Roku, they get instant access to 30 million viewers. No one else can offer that.

Roku is still worth just $12 billion. With the massive shift toward streaming continuing and a powerful position as an aggregator that benefits from network effects, I think Roku is an excellent investment at today’s prices.

MongoDB: Organizing all types of data

If you haven’t noticed by now, one of the themes of all these recent IPOs is data. It’s everywhere, and it’s extremely valuable. Being able to store, search, and analyze that data is paramount: Companies that can do that capitalize on opportunities the competition didn’t even know existed.

For much of the past 20 years, such data was organized in something referred to as “structured query language (SQL) databases.” In plain English, this means that data was stored in columns and rows.

But now, data is…